skip to main | skip to sidebar

This blog will shut down soon

Our Port of Long Beach Centennial blog was created for our 100th birthday celebration back in 2011 -- in a few months, the blog will be shut down and the content here moved to our regular website, at www.polb.com/history.

Unfortunately, the company that hosted our photos for this blog has gone out of business. If you would like to see some historical photos of the Port, please visit http://porttown.polb.com.

In the meantime, if you have any questions, please email webmaster@polb.com. Thank you.
Posted by Port of at 9:39 AM No comments:

Came across an interesting blog item from KCET on how Santa Monica almost became a commercial harbor. A political battle between the Southern Pacific Railroad and the L.A. Chamber of Commerce ended with San Pedro Bay being selected for commercial development, leading to the creation of the ports of Long Beach and Los Angeles.

Take a look: How Santa Monica Almost Became a Commercial Harbor
Posted by PortofLB at 3:54 PM No comments:

For a good chunk of the Port's history, from the mid-'50s through the late 1980s, a young woman was chosen to be Miss Port of Long Beach for a year.

Not simply a beauty contest title, Miss Port of Long Beach would be called upon to represent the port at functions throughout the harbor and the wider community.

Our records and photographs of Miss Port of Long Beach are unfortunately a bit scanty. Among the names and photographs we do have are Diane Olson, who was Miss Port when the current administration building was dedicated in 1959; 1975 titleholder Theresa Marino, who was recently interviewed for our documentary "Faces of the Port" and who just retired from the Long Beach Health Department, Mary Ann McHenry, who was Miss Port in 1955 (and who may have been the first), and a few others.

So we were especially glad to hear from Debbie Haines Seccombe, who now lives in Washington state but who, as Debra Haines, was Miss Port of Long Beach from 1976 to 1978. She sent us some photos, clippings and reminiscences to share:

"I had the honor and privilege to serve as Miss Port of Long Beach from 1976 through 1978. I can remember attending many functions along side the then Mayor Tom Clark, including the arrival of the Tall Ships sponsored by Cutty Sark celebrating our country's bicentennial. (Ironically, the one thing I can remember the most is the Tall Ships event because it was where I first tasted scotch!)

"I also have a photo with actor Lorne Greene and his wife at a dinner onboard the Queen Mary and attended several functions inside the Spruce Goose hangar. My most memorable experience, however, was flying in a helicopter over the Port of Long Beach. That was a very fun time!

"Because they liked me, I was asked to serve as Miss POLB for two years instead of the traditional one. The basis for my selection was strictly an interview. I often attended events with Miss POLA and Miss International Business.

"My roots were in the port since my dad was a chief in the merchant marines during WWII and took me to Pierpoint Landing and the shipyard to see his 'big boats' as a little girl … the seals at PPL were well worth the trip.

"Although I was raised in Long Beach and attended school there K-12, I moved from there after I left for college and never returned but for a couple of Wilson High School reunions and to visit with my parents.

"My oldest son is also connected to the industry indirectly. He graduated from the USNA in Annapolis, MD and is currently serving as a Naval aviator in the squadron assigned to the aircraft carrier USS Carl Vinson (very well-known due to recent events)."

Thanks for sharing your memories Debbie! We'd love to hear some more stories from or about Miss Port of Long Beach -- you can reach us using our Share Your Memories form.

You can see more photos here.

Posted by PortofLB at 1:17 PM No comments:

One of the more interesting "not here anymore" places at the Port -- the Pegasus Restaurant -- opened in 1962 on El Embarcardero, just down the street from the former location of the Port's administration building.

The restaurant was located in a $215,000 structure that also housed the wharfinger's office, the security office and space for the Coast Guard and U.S. Customs, and unlike those offices, the Pegasus featured lingerie-clad waitresses serving beer at 5 in the morning.

We only could find one real reference to the Pegasus online, which was a post by Nancy Ellison on a blog called "One for the Table" that offers a taste of the Pegasus' atmosphere in later years:
"The smell of cigarettes and beer was the first aroma that greeted me as I entered the plate glass windowed 1950’s style roadside café in the heart of the docks.  The neon lights and lit beer signs offered an odd, alien contrast against the warm glow of the rising sun which rose behind the oil pumps on the road coming in. "

You can read the rest of that article -- which features a great interior photo of the restaurant -- here.

Photos of the Pegasus in the Port archives are pretty scarce; we'd love to see more of the interior and hear some stories, so if you have any memories or photos please share them with us.

The restaurant closed sometime around 1993, and the building is gone now; the property is part of the ongoing Middle Harbor development.

In addition to the Gerald Desmond Bridge on the east side of Terminal Island, and the Vincent Thomas Bridge, which has connected the west side of the island to San Pedro since 1963, two spans connect the north side of the island to the mainland. The Henry Ford Bridge and the Commodore Schuyler F. Heim Bridge run parallel to each other, the first carrying rail traffic and the second trucks and autos along the Terminal Island Freeway.

Both are drawbridges that open to allow shipping traffic to pass along the Cerritos Channel, the waterway that connects the ports of Long Beach and Los Angeles.

The Henry Ford Bridge came first, in 1924, when it was known as the Badger Avenue Bridge (the Ford plant was built next to it in 1930). Photos at the time show the elegant structure rising incongruously out of the mudflats surrounding it. The bridge's designer, Joseph Strauss, was a few years later the chief engineer and one of the designers of the Golden Gate Bridge -- he also wrote poems about the Golden Gate Bridge and the Sequoia redwoods. After the jackknife bridge was removed from the eastern end of Terminal Island in the mid-'30s, the Ford Bridge became the only rail link to the mainland. The original bridge was replaced in 1996 and now serves as a gateway to the Alameda Corridor, the 20-mile rail cargo expressway linking the ports to rail yards east of downtown Los Angeles.

Next to the Ford Bridge is the Commodore Schuyler F. Heim Bridge, named for the commander of the Terminal Island Navy base during World War II. The bridge was built shortly after World War II (and paid for by the Navy). The Heim is part of the 47/103 Freeway and the heavy truck traffic has taken its toll on the bridge; a project is being planned by the Alameda Corridor Transportation Authority and Caltrans to replace the drawbridge with a fixed bridge -- you can read about the project here.

Perhaps more interesting than the Heim's planned replacement is its appearance in movies and television shows over the years, the Terminal Island Freeway being (like Shoreline Drive) one of those thoroughfares that's fairly easy to close off for filming with a relative minimum of traffic disruption. Recently, the Heim had a prominent role in Inception -- the heroes' van falls off the bridge to provide them with their "kick" (if you don't know what we're talking about you'll have to see the movie), but here's the scene in question.

And a classic: Mike Connors runs across the Heim at the beginning of every episode of Mannix, to the accompaniment of one of Lalo Schifrin's best themes -- you can check that out here.

We know lots of other films and TV shows have filmed on and around the Heim and Ford bridges and the Terminal Island Freeway (Terminator 2, a couple of the Lethal Weapon movies, for instance), so if you know of any or have any stories about filming, post a comment here and share.

Photo gallery of the Ford and Heim bridges

Pictorial history of the Vincent Thomas Bridge at the Port of L.A. site

Since its earliest days in the 1910s, the Port of Long Beach has needed reliable access to Terminal Island. The first bridge from Long Beach to the island was a single railroad track built on a wooden trestle by the Salt Lake Railway. By 1908, though, it was clear something better (and something that didn't block access to Craig Shipyard) was needed. So in that year the trestle was replaced with a 187-foot bascule drawbridge, commonly referred to as the "jackknife" bridge, because it opened and closed just like a pocket knife.

The jackknife bridge was in place for years, but at some point during the mid-1930s it was removed when the Union Pacific stopped using it. Incredibly, there was no bridge there for several years, leaving the Badger Avenue Bridge (now known as the Henry Ford Bridge) over the Cerritos Channel as the only rail link to Terminal Island. (We'll have more on this bridge in Part 2 of this post.)

When World War II came along, the Navy needed better access to and from its station and shipyard on Terminal Island. So a pontoon bridge was constructed that could be opened and closed to allow ship traffic to pass into and out of the harbor. The pontoon bridge was intended to be a temporary structure in place for six months, but it was used for decades. Many longtime Long Beach residents can tell stories about crossing the peculiar span, which literally floated on the mouth of the L.A. River. Drivers, especially when alcohol was involved, would occasionally go over the side into the water, and traffic would often back up along Ocean Boulevard when ships passed through. In 1946, the Spruce Goose was transported over the pontoon bridge -- you can read more and see pictures here.

In the 1960s, the pontoon bridge was replaced by the Gerald Desmond Bridge, which eliminated the need for a movable bridge and could handle much larger traffic volumes. These days, time and traffic have taken their toll on the Desmond (nets called "diapers" are placed underneath it to catch chunks of concrete), and the bridge is slated for replacement beginning next year. The new bridge will allow the largest post-Panamax ships to enter the Port, as well as accommodate more traffic. For more information on the replacement project, go to www.polb.com/bridge.

See a photo gallery of the Terminal Island bridges. 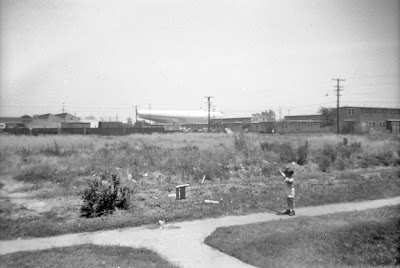 Reader John Fry wrote in with this great picture (taken June 15 or 16, 1946) and note (you can click on the picture to blow it up):
"I've been going through some family negatives.  We lived in Navy Housing at West Willard and Santa Fe in the late 1940s.  I believe this is me pointing to the Spruce Goose heading down Santa Fe.  I turned 3 on October 4, 1946."
Posted by PortofLB at 11:39 AM 1 comment:

We want to hear from you! For our 100th anniversary, the Port of Long Beach will share oral histories, photos, little-known facts and other glimpses into the past. Visit the Centennial website at www.polb.com/100years.

We welcome you to share your comments here on the blog.